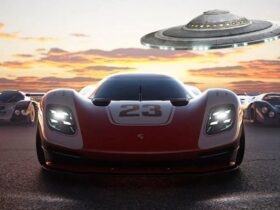 Former BioWare CEO Casey Hudson has revealed more about what’s going on in his new Humanoid Studios outfit, and it sounds exactly as you’d expect from Mass Effect’s project director: “A multi-platform AAA game, focused on on character-driven storytelling in a whole new science fiction universe.”

Hudson had a long career at BioWare, going all the way back to Baldur’s Gate 2 and MDK 2, but he is best known as head of development for the original Mass Effect trilogy. He left BioWare in 2014 and thus was not involved in the development of Mass Effect: Andromeda, but returned shortly after its release in 2017 to take over as the studio’s general manager. Hudson departed again, quite unexpectedly, in late 2020, along with Dragon Age executive producer Mark Darrah; he unveiled Humanoid Studios in June 2021, but said nothing about his first project, other than that it would be a “brand new IP”.

We still don’t have a name for Humanoid’s debut game, but thanks to a major update to the studio’s website, we now have that very basic description above and a few bits of concept art that look very Mass Effect-esque to me: Human explorers in spacesuits stare at the skull of a massive, presumed (hopefully) dead creature or machine; long stretches of shiny technology embedded in tranquil green spaces; a spacious lounge around a pockmarked planet; and more explorers, scurrying outside their space cars on a decidedly poisonous-looking planet.

Some of the tech looks less refined than what we saw in Mass Effect — that orbital lounge is more 2001 than 2183, and those spacesuits are bulky — but you can’t take too much away from a handful of game art at this early stage. (Let’s not forget that Destiny would one day feature a very large frog.)

Most of Humanoid’s website isn’t devoted to the new game, but to finding people to help make it. Posts on the site talk about creative freedom and independence, as well as that the studio is “a safe and supportive environment” to work in, reflecting growing concerns about widespread toxicity and abuse in the video game industry.

“We believe in the power of small, agile teams and a flat organizational structure, where everyone is able to make decisions and help realize the project vision,” the site says. “We hire great people, give them the best tools and a supportive environment, and give them the creative freedom to explore their full potential.”

Big name developers announcing new studios long before they’re ready to talk about what they’re actually doing seems to be becoming an increasingly common phenomenon. In some cases they are explicitly looking for new employees, but in other cases the target seems to get the most attention. Jade Raymond launched a new studio and then sold it to Sony without saying a word about the first new game, while the creator of Yakuza announced his own new studio with nothing more than a promise that his future games will be “bigger” than his former. dr. Disrespect kicked off its own development project late last year with little more than the promise of “the best, most community-focused online PVP multiplayer experience the world has ever seen” (and job openings), and in 2020 Hudson’s BioWare alumnus Mike Laidlaw is rolling out his own studio , which only revealed last week that it’s working on “an all-new fantasy action RPG” — and that it hiring†

Even without major developers attached to it, early game announcements are also increasingly becoming the norm. It felt like a real novelty when Bethesda confirmed that The Elder Scrolls 6 is in development while also warning that it would be many years away (and they really weren’t kidding about that), but BioWare recently did the same for new Dragon Age and Mass Effect- games, and yesterday CD Projekt released a Witcher 4 confirmation that contained virtually no information beyond the fact that it actually happens.

Humanoid Studios is clearly on the “help wanted” side of that equation, and the website currently has a list of several high-level positions, including lead artists, a lead designer, lead writer, and senior designers and programmers. Unfortunately, there’s nothing specific about the game in the listings, other than that it’s apparently made with the Unreal Engine.