One of the classic and rarest RWD supercars in the world, the Lamborghini Diablo is regarded as one of the fastest cars that were featured in Forza Motorsport 7 and Forza Horizon 4. The newest entry of Forza doesn’t miss on featuring any of the unique licensed cars, along with various cosmetics, new challenge events, and a festival playlist that introduces tons of content in the game. If you’re a die-hard collector and wish to obtain many of the unique cars from Forza Horizon 5, then owning Lamborghini Diablo is a must, as it is one of the best cars in the game and is perfect for drag races that require faster acceleration and top speed. Read on more to know how to get this car in Forza Horizon 5 and the requirements you need to fulfill to get it.

How to unlock Lamborghini Diablo in Forza Horizon 5

Unlike other rare cars that players can get hold of by doing certain events in the Festival playlist or doing accolades, this isn’t the case for Lamborghini Diablo as the steps required to unlock are complicated in FH5. In order to get your hands on Lamborghini Diablo, you need to head straight into the auto show, once you’re in there, head over to the Lamborghini section and you’ll see the Lamborghini Diablo SV 1997 listed there and costs 174,000 credits, making it one of the inexpensive cars that you can own in the game and is a beast when used in Drag races. Buy it if you can and is available through the car mastery skill perk in the game, and you can buy 10 of Diablo’s SV around 2 million credits and for 500 skill points which lot of guys upgrades and sell it for a good price in the auction house. 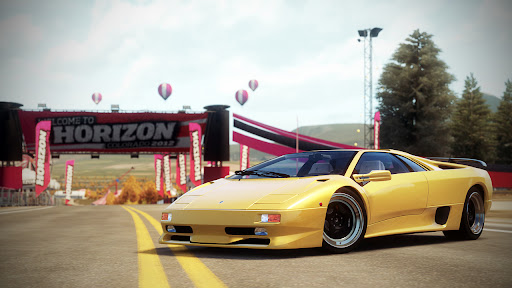 After buying Lamborghini Diablo, head to “Garage” and then select Car Mastery and will cost you around 60 skill points to unlock the full perk of the car and worth the price. Unlocking the full perk gives you an easy way of completing Drag Races with ease and a few other races as well. If you own more than one of these cars, you can make a huge amount of money by selling them as many aren’t aware on how to get it on Forza Horizon 5 and is considered rare. You can set the price around 2 million or 1.5 million and those who are looking for this vehicle will offer handsome credits for it.